This article is the final part of a 9 part series on Universal Restoration vs Eternal Torment (hell).  I recommend reading the introduction first if you haven’t already.  (link below)

One Universalist said this:

“Am I a heretic? Maybe. If believing that God is all powerful, all loving, wiser than His creation and perfectly willing and capable of saving all of His children makes me a heretic, sign me up.”

That perfectly sums up their position. The early Christians called Universal Reconciliation “The Larger Hope” for that’s what it is.

Anyone without a serious heart problem will wish that the Universalists are right. However, wishing they are right doesn’t make them right. I’m not saying they are right, but I do think their opinion is valid enough that it should be part of the argument.

I don’t think the scriptures condemn Universalism is quite as much as most people believe. I simply wish that Universalists could have a discussion (or even mention the concept) without being branded as heretics who should be shunned.

Christians have debated sovereignty vs free will, whether or not you can lose your salvation, original sin and a whole host of issues over the centuries. I think that Universalism has enough support from the scriptures that at the very least “Eternal Torment vs Universal Restoration” should be another one of the great debates the church has with itself.

I have so far tried to keep my points firmly rooted in scripture with as little appeal to the heart as possible. One must be careful that your personal feelings don’t lead you astray when searching for the truth.

But I will break that rule here at the end to share a story.

In the live action version, the last petal from the rose falls and completes the curse. Once the petal’s fall is complete, everyone in the castle turns from talking furniture into inanimate, dead furniture. The beast has been shot and breathed his last breath. Bell (the only survivor) is weeping over the beast’s body.

There are several seconds where the movie almost appears to be over because nothing happens. It’s a sad and somber moment. In this pause – at the most hopeless point of the story – the niece leaned over to my friend and asked:

“Is it over? That’s not a very good ending.”

Honestly, that’s how I feel when I talk about Eternal Torment.

Like Bell in the live-action Beauty and the Beast, will believers be the sole survivors weeping for our loved ones while knowing they will be tormented forever? I know the Bible says every tear will be wiped away, but still…

Jesus came to “destroy the works of the devil” but did He fail?

Will most of mankind be forever separated from God and eternally tormented in hell, seemingly giving the devil a huge victory over the Almighty God?

“That’s not a very good ending.” 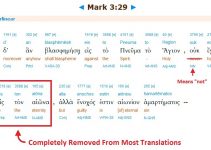