Home
Faith Articles
Is God Male, Female, or Neither/Both? (“What are God’s Pronouns?”) 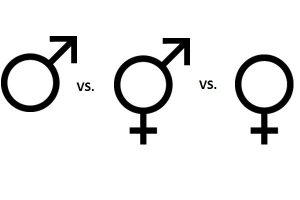 Contents show
How does God describe Himself?
But isn’t the Holy Spirit Feminine in the Old Testament?
But what about the New Testament?
“But maybe that’s just ‘The Patriarchy’ making God look Masculine“
An (unfortunately necessary) addendum: Yes, women absolutely are created in the Image of God.
If both men and women are made in the image of God, why is God always portrayed as masculine?
Conclusion

How does God describe Himself?

Not once in the entire Bible is God referred to as feminine.

Not one single time.

God is always a Father (but never a mother) and Jesus was obviously male. The pronouns used for God are always masculine, never feminine, and even The name of God (Yahweh, or Yehowah) is a masculine word.

Sometimes God uses feminine analogies, but so does Paul and we all agree he wasn’t a woman.

But isn’t the Holy Spirit Feminine in the Old Testament?

Grammatically, yes the Hebrew word for spirit “רוּחַ” (ruach) is a feminine word.

However, there’s a complication from the Hebrew Language itself.

Hebrew is a fully gendered language, meaning every single word in Hebrew is always grammatically either feminine or masculine. Unlike English and Greek, there are no “neuter” words.

For example, in English we have he, she, and it for pronouns (Greek is similar). “He” is obviously male and “she” obviously female, but “it” can be neither male or female. Hebrew doesn’t have any gender neutral words like “it”. (many modern languages are also this way, such as French)

Therefore, in Hebrew everything – even inanimate objects like tables, chairs, or books – are always grammatically either “he” or “she”; but never “it”.

Obviously, books have no gender.

However in Hebrew, grammatically they must have a gender. No Hebrew speaker would think a table, chair, or book was a man or woman, even though the language forces you to say it is.

Further, some words are always feminine or always masculine regardless of any other elements.

1 In the beginning God created the heavens and the earth.

27 When they told him all the words of Joseph that he had spoken to them, and when he saw the wagons that Joseph had sent to carry him, the spirit (ruach, a feminine word) of their father Jacob revived.

You wouldn’t use this passage to argue that Jacob was a woman would you?

You would look to the subject of the sentence (Jacob) to get the proper gender. That’s because while ruach is technically feminine, it can’t confer gender because it can’t exist as a masculine word.

However, Hebrew proper names can always exist as either masculine or feminine, and thus always determine gender.

God’s proper name “יְהוָֹה” YHWH, typically – and probably incorrectly – pronounced “Yahweh” is a proper name, and therefore can be either masculine or feminine to indicate gender.

God’s proper name (YHWH) is always masculine every time it’s used; it is never feminine (not even once).

Also, Hebrew pronouns can be either masculine or feminine and thus be used to determine gender.  Every time a pronoun is used for God, it’s always masculine.

Hebrew is different than English. However, even with the differences there isn’t a single place where God is referred to in the feminine.

But what about the New Testament?

The Greek word for Spirit is “πνεῦμα” (pneuma), which is always grammatically a neuter word (like the Hebrew word is always feminine). It never has a masculine or feminine form and thus can’t be used to determine gender.

Obviously Jesus was a male, and equally obvious is the imagery of “The Father” being masculine. Further, despite not being able to glean anything from the Greek word for spirit (pneuma), there is a place where the “gender” of the Holy Spirit is directly stated by Jesus.

13 But when He (masculine pronoun), the Spirit of truth, comes, He will guide you into all the truth; for He will not speak on His own (masculine reflexive pronoun) initiative, but whatever He hears, He will speak; and He will disclose to you what is to come.

There is some debate as to whether the first pronoun in the sentence can be applied to the Holy Spirit.  However, there’s no debate about the second.  The second pronoun is the Greek word “ἑαυτοῦ” (heautou) and it means:

1438 heautoú (reflexive pronoun of the 3rd person) – 1438 /heautoú (“himself, herself, itself,” etc.) is the 3rd person reflexive (singular, plural) form which also functions as the reflexive for 1st and 2nd person (A-S).

Now, Greek words change gender depending on the ending of the word.  (many languages are like this, including Spanish.  For more about Biblical Greek, I recommend my article A few fun things about Biblical (Koine) Greek) So for example, in the following verse it’s in the feminine form:

for she was saying to herself (heautoú in the feminine form), “If I only touch His garment, I will get well.”

However, in John 16:13 where it’s referring to the Holy Spirit it’s in the masculine form = male.  You can double check this by looking at John 16:13 in an interlinear Bible.  Screenshot below: 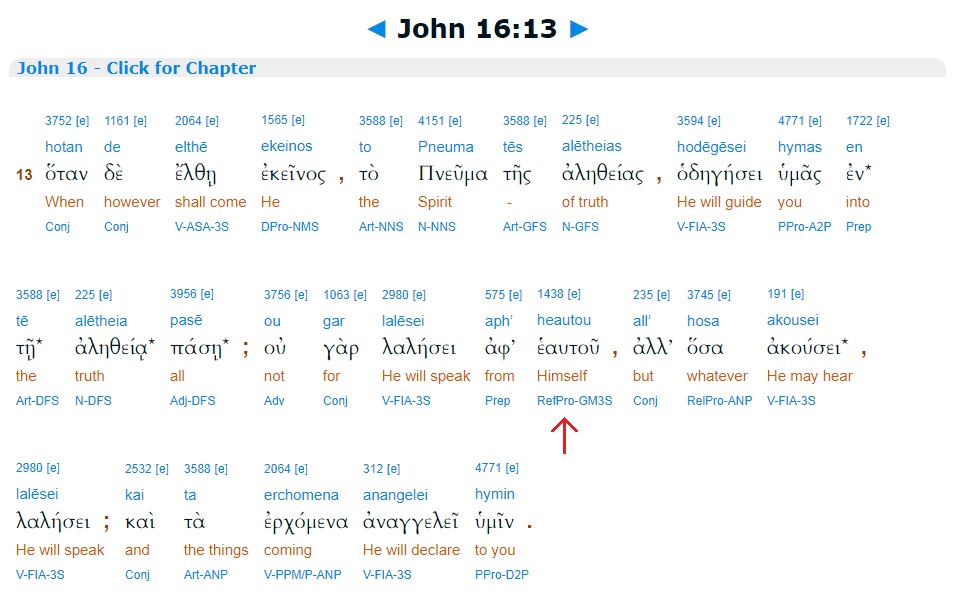 The blue letters “RefPro-GM3S” at the bottom indicate the word’s type and form.  In this case, it stands for “Reflexive Pronoun – Genitive Masculine 3rd-person Singular“.  Again, the referent of this word is clearly the Holy Spirit and it’s a masculine word.  Since you can determine a person’s gender in Greek by looking at their pronouns, Jesus was clearly referring to the Holy Spirit in masculine terms.

So that leaves us with one inescapable conclusion:

Never – not even once – is The Father, The Son, or the Holy Spirit referred to as feminine in the entire Bible.

Therefore we can be sure that God definitely wants us to see Him as masculine. The entire Bible bears this out by its 100% consistent use of masculine words when describing God.

I mentioned the above to someone one time, and their response was saying that’s because all the writers were men, so they made God male.  They argued it was part of the “evil” patriarchy and couldn’t be trusted because there was male bias.

The problem with that statement is it’s self-contradicting.

Either the Bible is a trustworthy source of information about God or it isn’t.

You can’t have it both ways.

If “The Patriarchy” messed with the Bible, then it’s not trustworthy because it’s been messed with and can be safely ignored.  If the Bible hasn’t been “messed with”, then we can take it at its word.

An (unfortunately necessary) addendum: Yes, women absolutely are created in the Image of God.

We’ll look at each in turn.

Before we look at the first, I need to mention something.  In Genesis 1:27, there is a Hebrew definite article (equivalent to our English word “the”) omitted by most translators.  You can double check me in an interlinear Bible here.

I have inserted it below.

26 Then God said, “Let Us make man in Our image, according to Our likeness; and let them rule over the fish of the sea and over the birds of the sky and over the cattle and over all the earth, and over every creeping thing that creeps on the earth.”

27 God created [the] man in His own image, in the image of God He created him; male and female He created them.

This verse doesn’t explicitly say that women are created in the image of God. However, the phrase “male and female He created them” does directly imply it.  Even more clear is when God says “let them rule”. Them, being plural; i.e. Adam and Eve.

However, when read in Hebrew with the definite article (“the“), some Christians say that only Adam was made in the image of God.  However, they ignore the word “them” in verse 26 and also the following verse to make that assertion.

Genesis 5 is even more clear.

1 This is the book of the generations of Adam. In the day when God created man, He made him in the likeness of God.

2 He created them male and female, and He blessed them and named them Man in the day when they were created.

God named the entire human race “man”.  “Man” is the proper/correct name of the human race as decreed by God.  Verse 2 clearly says that God named them (plural) man. Man (including both men and women) were created in the image of God according to verse 1.

Therefore women are created in the image of God.

(It’s even more clear if you check the original Hebrew. I’ll omit that now for space’s sake though.)

There’s only one more verse some people use to argue women aren’t created in the image of God. It is:

7 For a man ought not to have his head covered, since he is the image and glory of God; but the woman is the glory of man.

There is a direct contrasting statement being made here.  Men are the “image and glory of God” but woman is “the glory of man”. However, Paul doesn’t explicitly say women aren’t made in the image of God.  You could argue it’s implied, but not in the face of Genesis 5 (which we just looked at).

So yes, women are definitely made in the image of God (shocker right? 😉 )

But that begs an interesting question:

If both men and women are made in the image of God, why is God always portrayed as masculine?

I have many suspicions – some of them strong – but nothing I’m willing to commit to immortality on the internet yet.  God chose to reveal Himself as masculine, and I’m willing to accept that He had a very good reason even if I don’t know what it is.

God The Father, God the Son, and God the Holy Spirit are always presented as masculine, 100% of the time with no exceptions. Therefore – whatever His reasons – God has chosen to reveal Himself exclusively as masculine.

I trust He has a good reason for doing so.

That said, both men and women display aspects of God’s character in their natures.  (Though that’s another article for another day.) 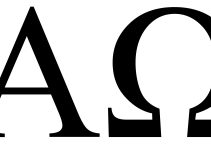