Several years ago, I found myself browsing Barnes & Noble looking for a good book to read.  I spotted a book by Malcolm Gladwell named “David and Goliath”, which peaked my interest because I absolutely LOVED his book “Outliers”. (Which is a great read and I recommend picking it up.)

Mr. Gladwell had a radically different take on the story of David and Goliath than I’d ever heard before. One that took historical context into account and completely shifted my perspective on this story.  I’ll let him explain in his own words, then comment on what I learned.

Goliath was expecting David to fight him close up, one-on-one like any other heavy infantryman would.  If David had fought Goliath that way, he’d probably be dead because he was fighting Goliath in his element.

But David didn’t fight that way.

David was a shepherd, and because of that he was an expert with a very different kind of weapon.  God had placed him in that occupation far ahead of time so he would have the skills that he needed to win.  David fought the way God had prepared him to fight instead of fighting the way the enemy expected and wanted.  That’s the point.

We will NEVER beat the enemy at his own game.

But we don’t need to fight the way the enemy expects.  That’s not how God prepares us.  Remember, “the weapons of our warfare are not earthly“, they come to us from God and you need to keep that in mind.  Prayer, love and above all obedience to God are what wins the battle.  God sometimes as strange ways of going about the victory, but He knows what He’s doing.

So I think that’s the moral of the story.  Don’t fight the way the enemy (and the world) expect; instead, fight with the tools and methods God gives you.

The difference is night and day. 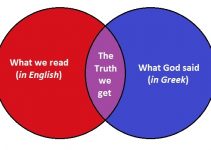